But there's good news. Kuala Lumpur is starting to catch up to veganism and a few restaurants are offering up delicious vegan options.

We spent five weeks in KL and experienced everything from vegan bliss to utter frustration at times.

We've written this vegan guide to Kuala Lumpur to help vegans find the best eats the city has to offer.

Unfortunately, the idea of veganism is still a foreign concept to many Kuala Lumpur locals.

We were served chicken three separate times despite emphasizing our vegan order. This included chicken shredded into hummus (WTF), inside a veggie burrito (also WTF), and mixed into veggie fried rice, which the staff argued was "just a different kinda mushroom." The chef confirmed it was chicken after asking him directly.

So, eating vegan can be a struggle in KL, but for the most part, it's alright.

The cost of vegan food in KL

One of our favorite things about life in KL was how absurdly cheap food costs.

There is incredible Indian food everywhere and it's ridiculously cheap. If you're on a tight budget you can find daal and naan (ask for no ghee/butter) almost anywhere for about 3 MYR ($0.70 USD).

At most specialized vegan restaurants, which we name in this guide, you're going to pay a lot more. However, it's still affordable.

Here are some of our favorite places to grab a bite in Kuala Lumpur: 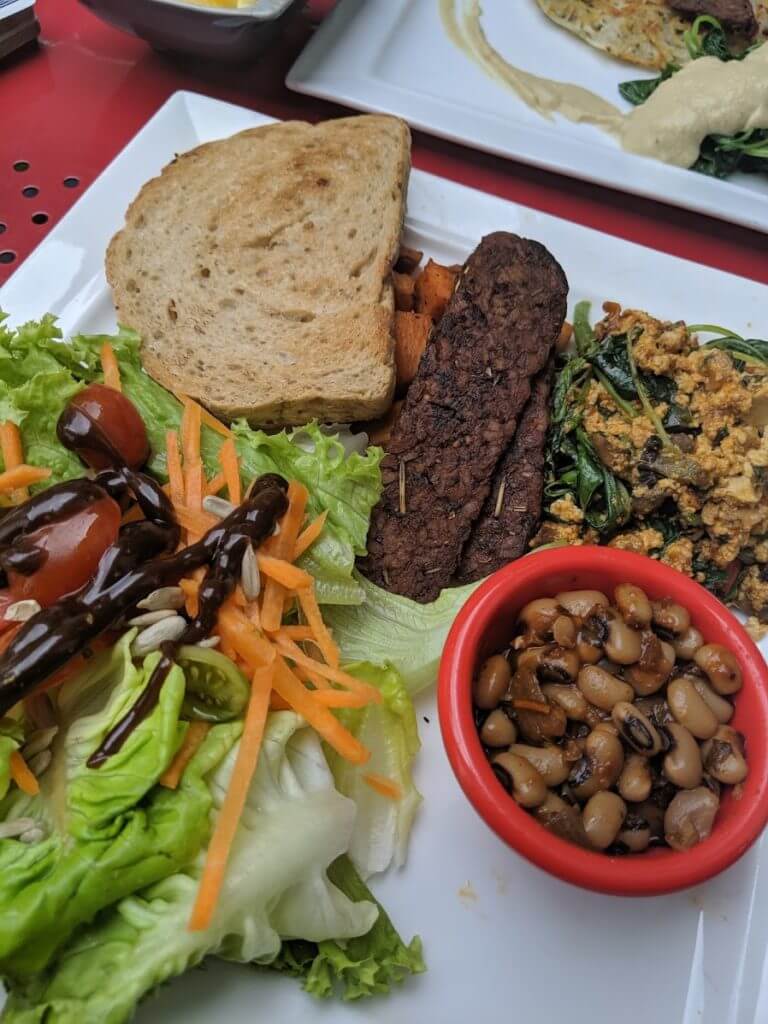 While not a 100% vegan cafe, this hidden spot serves up some of the best vegan food in KL.

It's one of the rare places in KL where vegans can spoil themselves with delicious vegan comfort food. The cafe is nestled down a quiet side-street serves up a mean vegan breakfast, as well as: pizzas, burgers, sandwiches and pasta dishes.

While the place doesn’t really look like much from the outside, inside it’s quite large and has a decent vibe. But the best thing about RGB is, of course, the food!

Compared to the price of local food in KL, you’re going to spend a lot more on food here – but trust us, it’s worth it.

We recommend the Vegan Breakfast which has incredible tofu scramble and tempeh bacon to die for.

Digital nomads looking for somewhere to work should look elsewhere to more workable cafes like Feeka, as the wifi was extremely slow on the two occasions we tried to work from RGB. 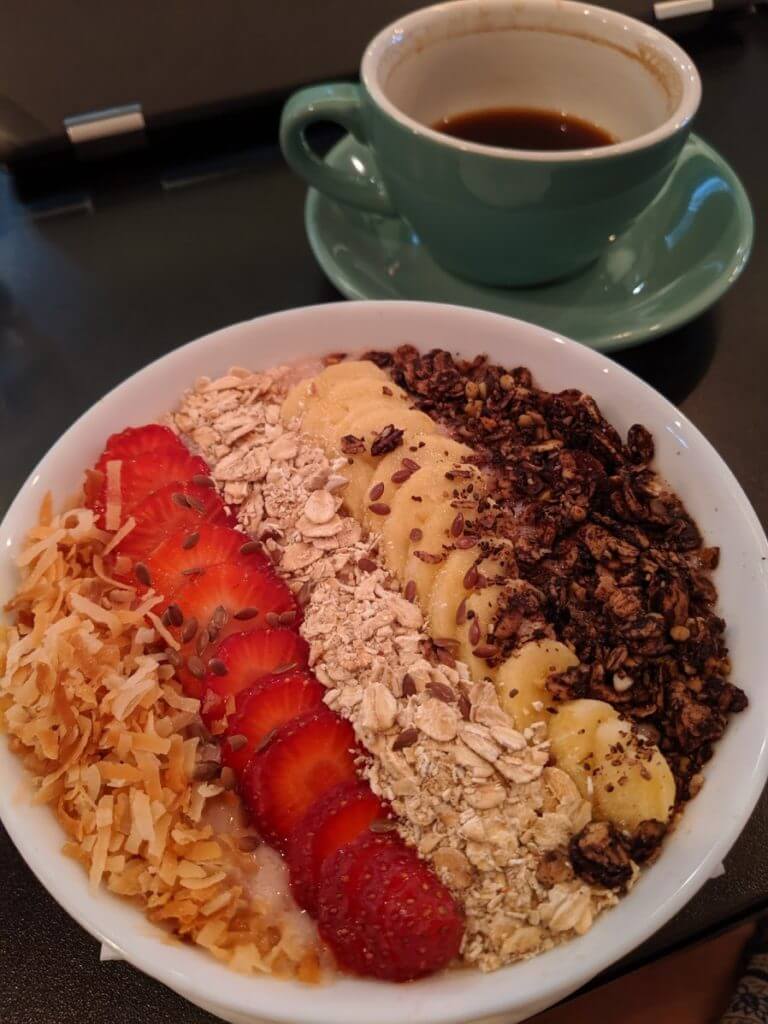 We spent a lot of time working in Feeka, one of KL's digital nomad hot-spots. While the cafe itself isn't vegan, there are options. Other bonuses are the wifi is reliable, the staff super friendly, and it's possible to get a healthy, wholesome vegan brekky here.

Our "go-to" was the deliciously filling smoothie bowls packed with oats, fruit, seeds and nuts. If you eat here make sure to ask staff to replace the yogurt with soy milk. 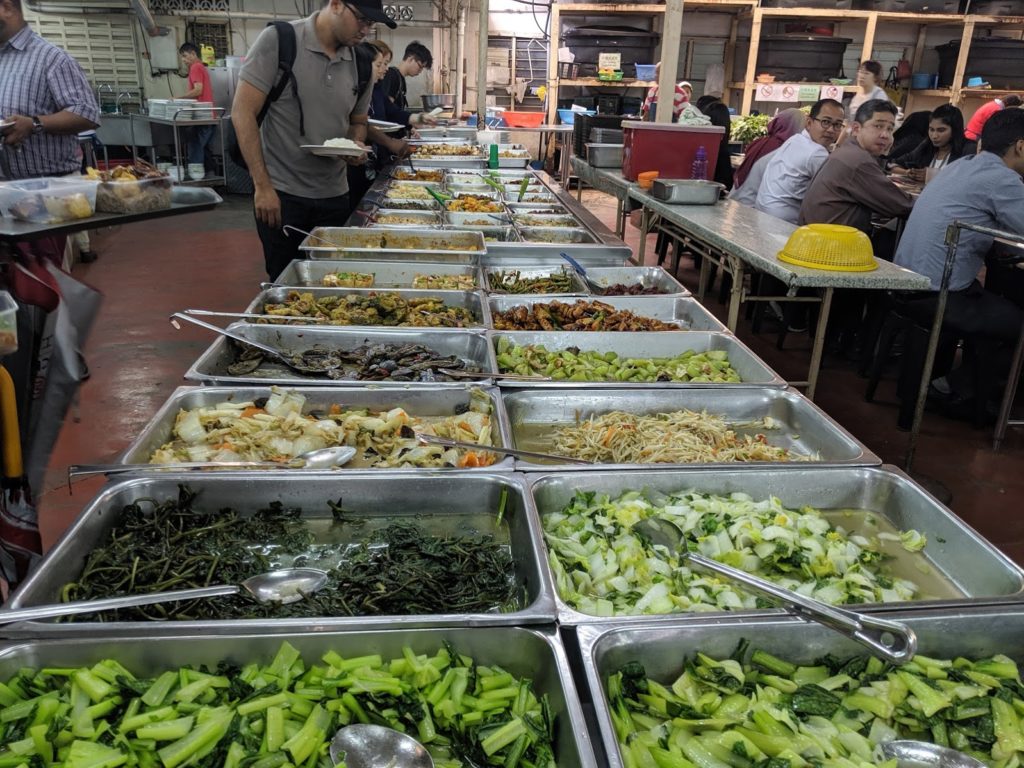 This place is truly one of the best kept vegan secrets in Kuala Lumpur. The restored Buddhist temple offers up an incredible vegetarian (everything was vegan when we were there) buffet every weekday from 10am-2pm.

Everyone grabs a plate and piles on the food. We both packed on something from almost 20 different food trays and paid 19.50 Ringgit for both meals including herbal teas. That's around $2.30USD each.

The food court fills up quickly and has an old school cafeteria feel to it, but in the best way possible.

This 100% vegan restaurant was our personal favorite. What's better, we stumbled on this place completely by accident when visiting a dog cafe (Ashley needed her dog fix) about 20 kilometers from the center of KL.

The hip restaurant is definitely ahead of the game in KL. They serve up incredible Mexican food with mouth-watering mushroom burritos that reminded me of Eat.Co's "meaty mushrooms" in Koh Phangan.

It is worth the 20 MYR Grab ride alone to head out to Sala. 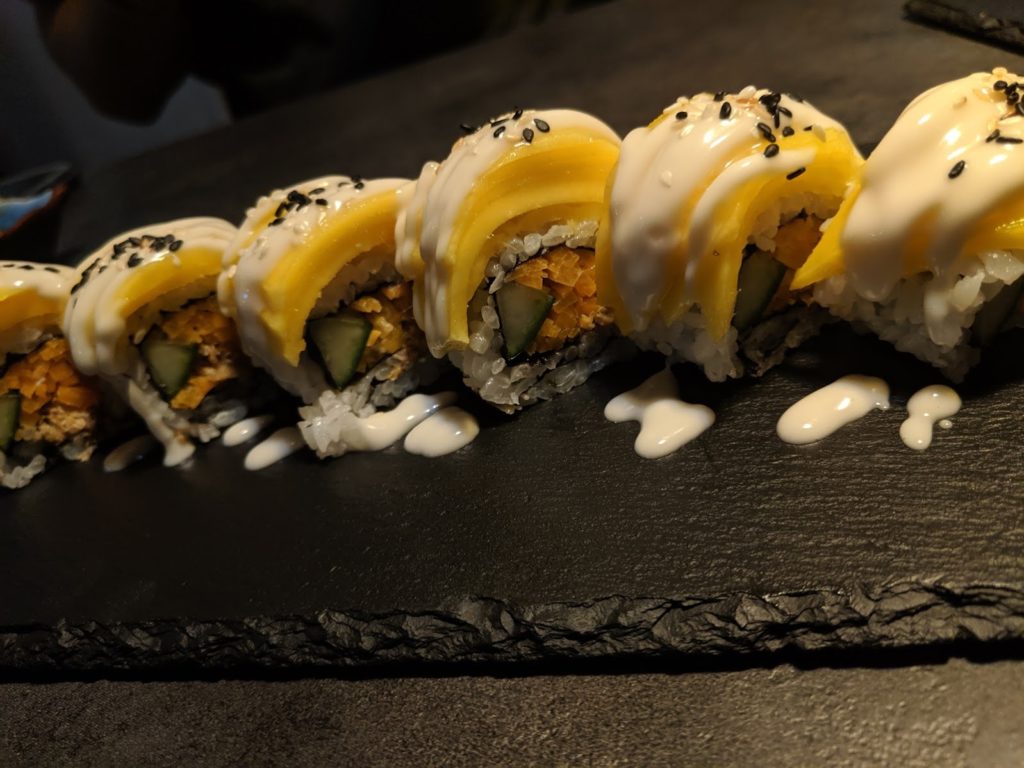 If you have cravings for sushi while in KL then you're in luck. The sushi at Sushi Kitchen in Bukit Bintang is completely vegan and made to order.

The restaurant is definitely on the pricey side and the portions are small, so you might not want to visit here extremely hungry. But when it comes to taste and quality Sushi Kitchen was unbeatable. And their unique mango roll was a real treat. 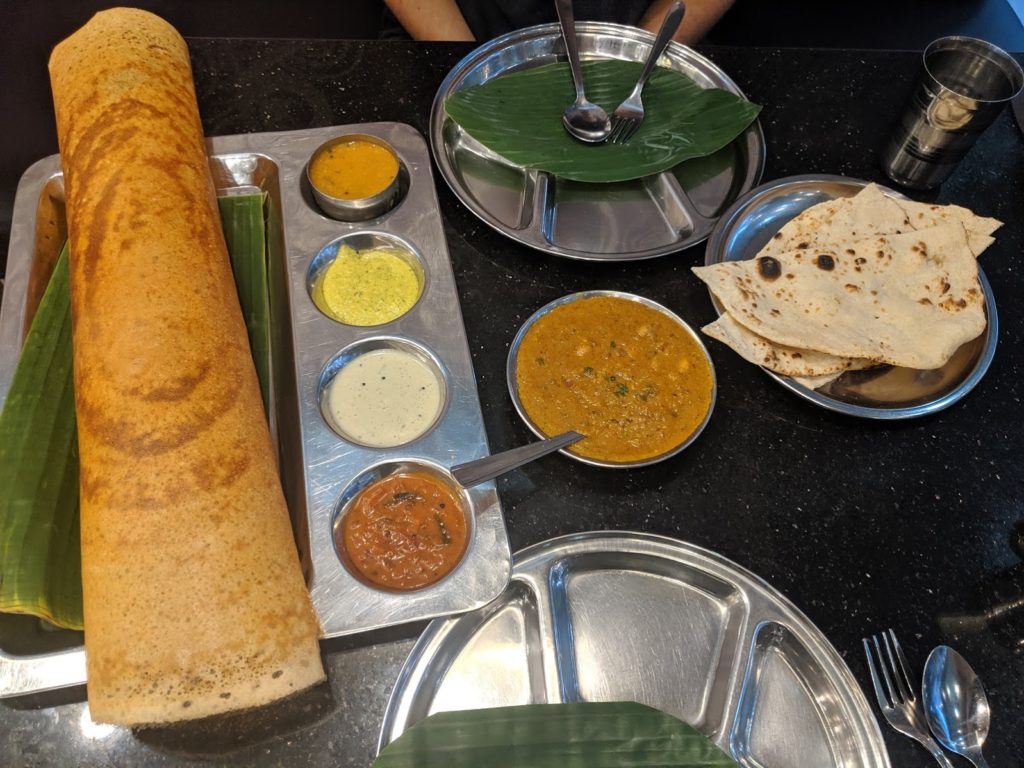 Kuala Lumpur is packed full of amazing Indian food and there are simply too many Indian restaurants to name in one blog post. But one of the tastiest 100% vegetarian (easily made vegan) Indian restaurants was Saravana Bhavan in KL's Little India.

We visited the restaurant a few times and it was a little hit and miss depending of the curry. But our favorite was the chana masala which had the perfect hit of Indian spices. The dosas were huge too and bigger than Ashley's arm!

Wedged between locals smoking shishas is the only way to truly experience Iraqi street food. Tarma is a small restaurant in Bukit Bintang that serves up usual Arabic food with a fast-food vibe.

While it's not a vegan place, and they do serve meat, it's easy enough to drop some sauces and yogurt to make certain things vegan. Our favorite was the hummus. 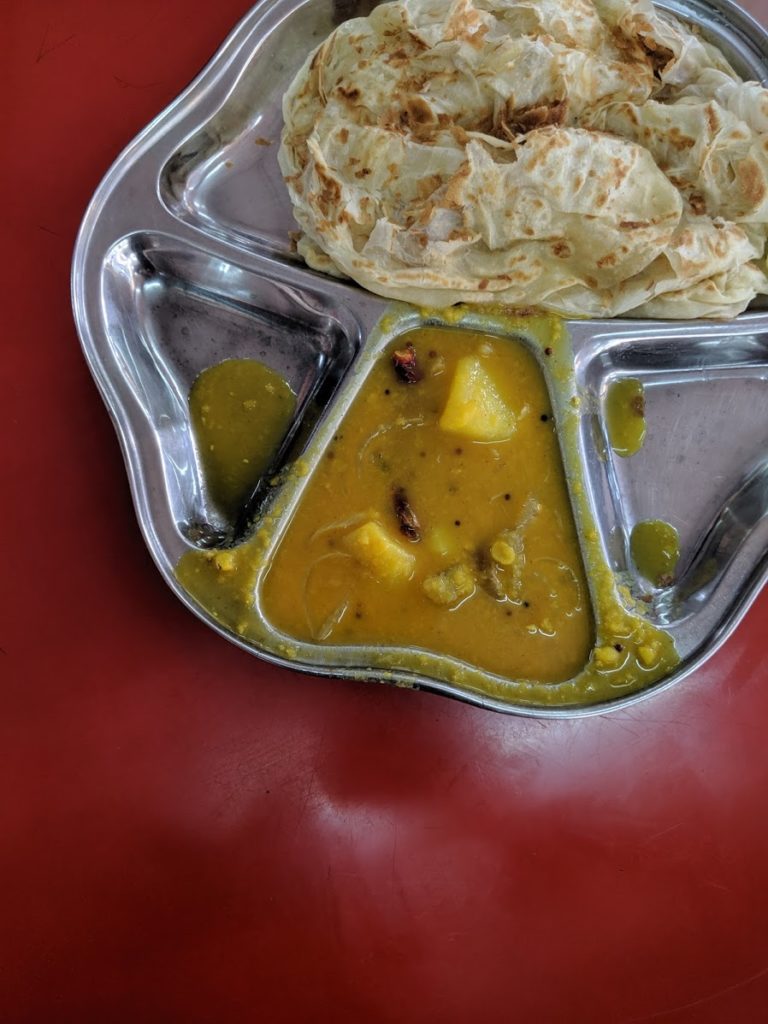 Local eateries are everywhere around KL.

They're easy to spot as they're usually a little run down and basic. However, finding vegan options in these places can be easy or a challenge. If it's an Indian eatery you can always order naan/roti and daal or grab a vegan curry.

We found locals often confused by the word vegan but saying 100% percent vegetarian instead seemed to do the job.

Tofu, tempeh and mushrooms are common in these places and can always be added to fried rice if you ask.

Other eateries simply won't have anything worth stopping for so it's always good to check what they have before sitting down, which is easy considering most of these restaurants have the food sitting out in self-serve trays.

There are a few things KL has in abundance and one of those is the infamous durian fruit. It was our first time trying the smelly fruit and our verdict was: never again! But oddly enough we recommend it. There's something fun about picking out your durian on the streets of KL and digging into the strange tropical fruit.

Love it or hate it, durian is a fruit that divides opinions but brings us together. 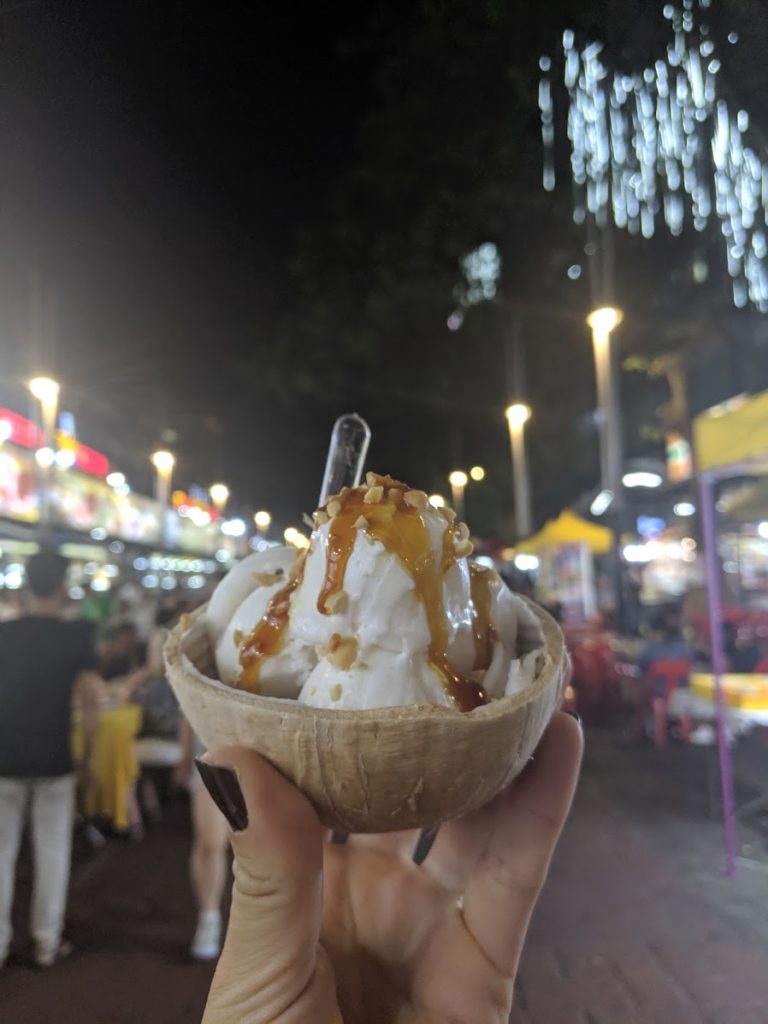 If you have a sweet tooth you can also find plenty of stalls selling coconut ice-cream for about 11 MYR ($2.60USD) on the famous Jalan Alor food street. They're also served in actual coconut shells which you can reuse during your stay if you plan on cooking.

A perfect late-night treat after a long day of exploring KL.

Do you want to cook like a professional vegan chef?

We've teamed up with Veecoco, a professional online vegan cooking school, to give you 7 days FREE access to all their vegan courses right to your own devices.

To start cooking plant-based meals like a professional claim your free trial here.

No one likes to think about it, but traveling in countries like Malaysia can be a risk. By covering yourself with the right travel insurance, you can enjoy the world without worries.

I always use Grammarly to proofread my posts.

You can get Grammarly for free by clicking here.

2 thoughts on “Vegan Food Guide: How to Eat Vegan in Kuala Lumpur” 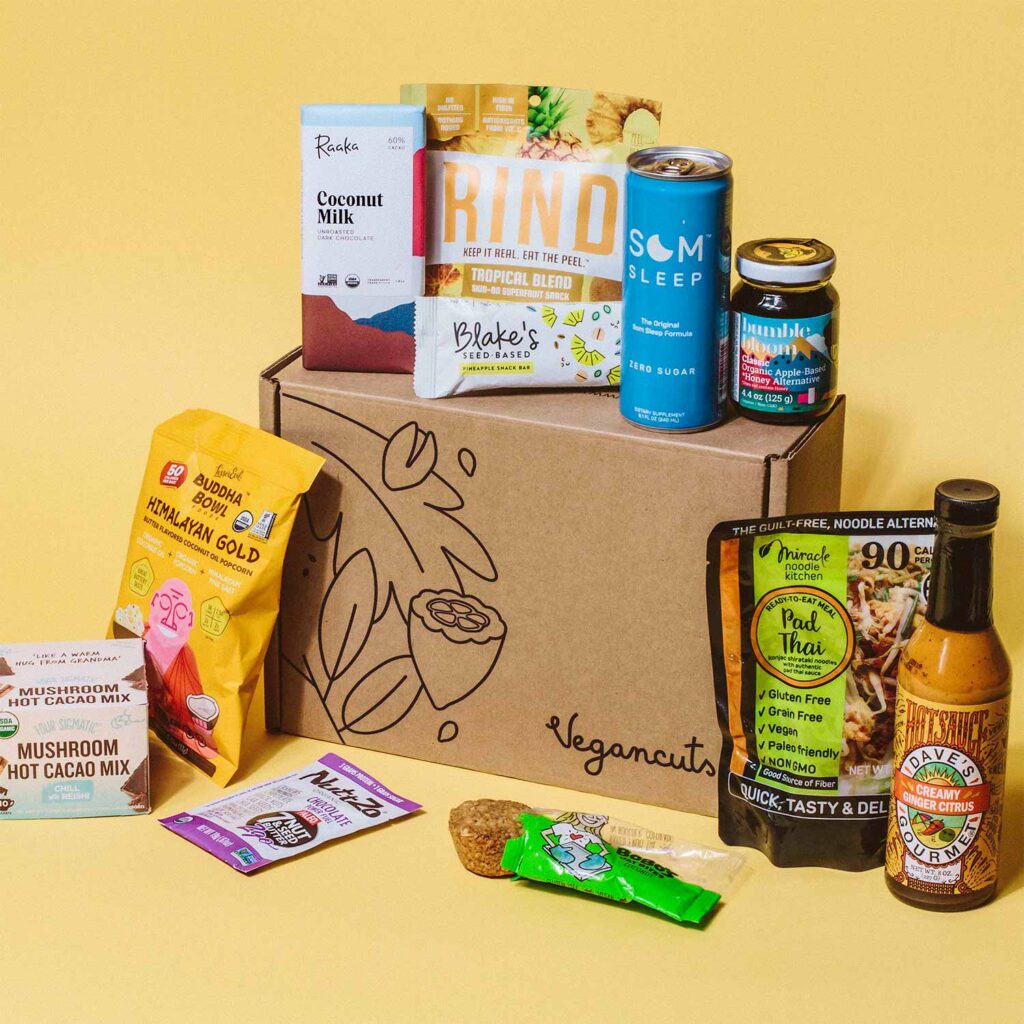